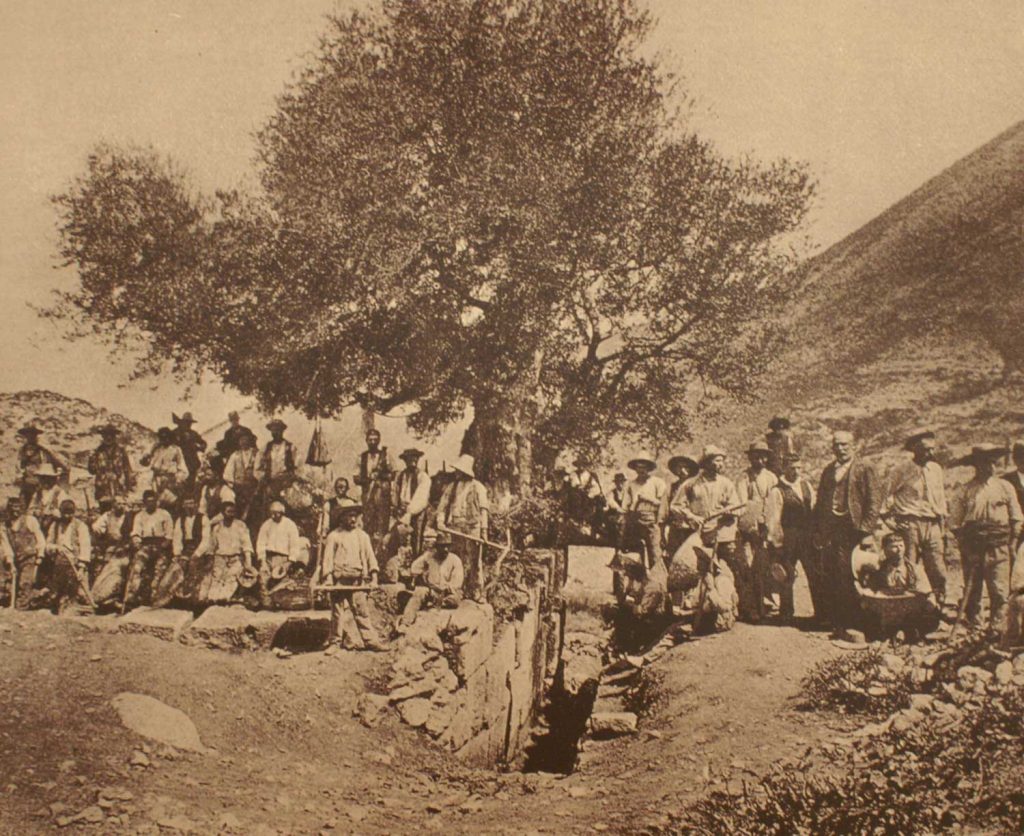 Excavation at the east gate of Same’s citadel on the hill of Paliokastro or “arxmajor”, run by P. Kavvadias. 1899

Excavation at the east gate of Same’s citadel on the hill of Paliokastro or “arxmajor”, run by P. Kavvadias. 1899
anaskafes_1 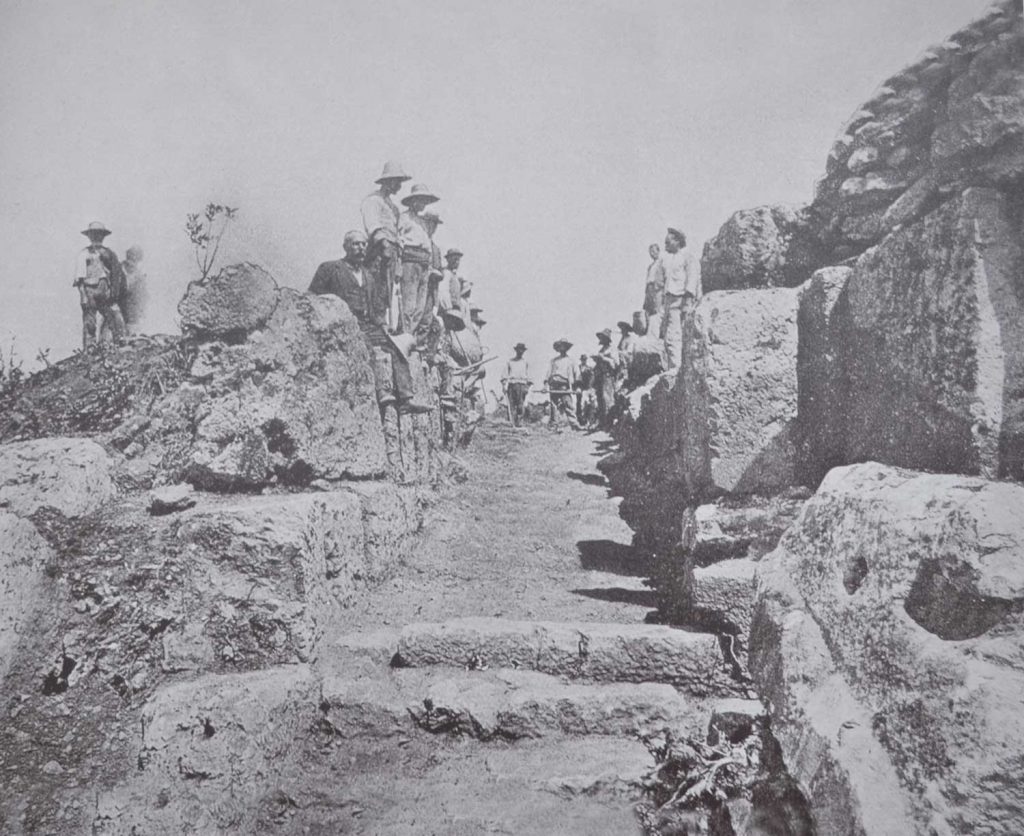 Excavation at the west gate of Same’s citadel on the hill of Paliokastro or “arxmajor”, run by P. Kavvadias. 1899

Excavation at the west gate of Same’s citadel on the hill of Paliokastro or “arxmajor”, run by P. Kavvadias. 1899
anaskafes_web_0 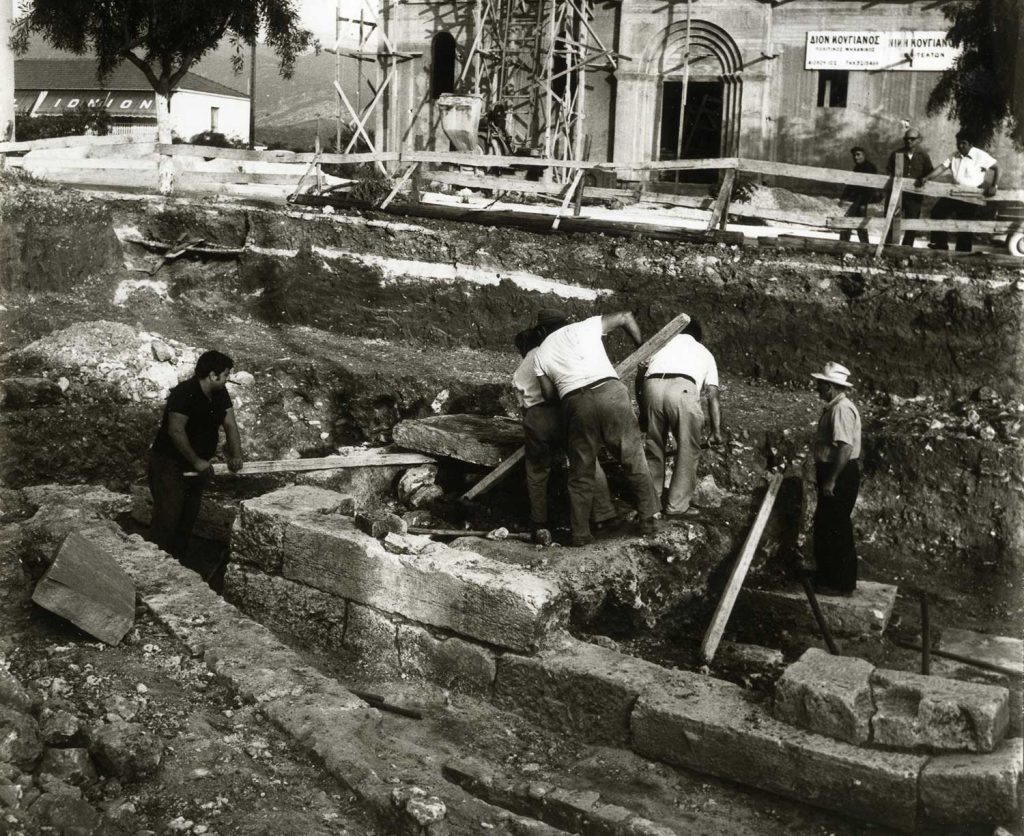 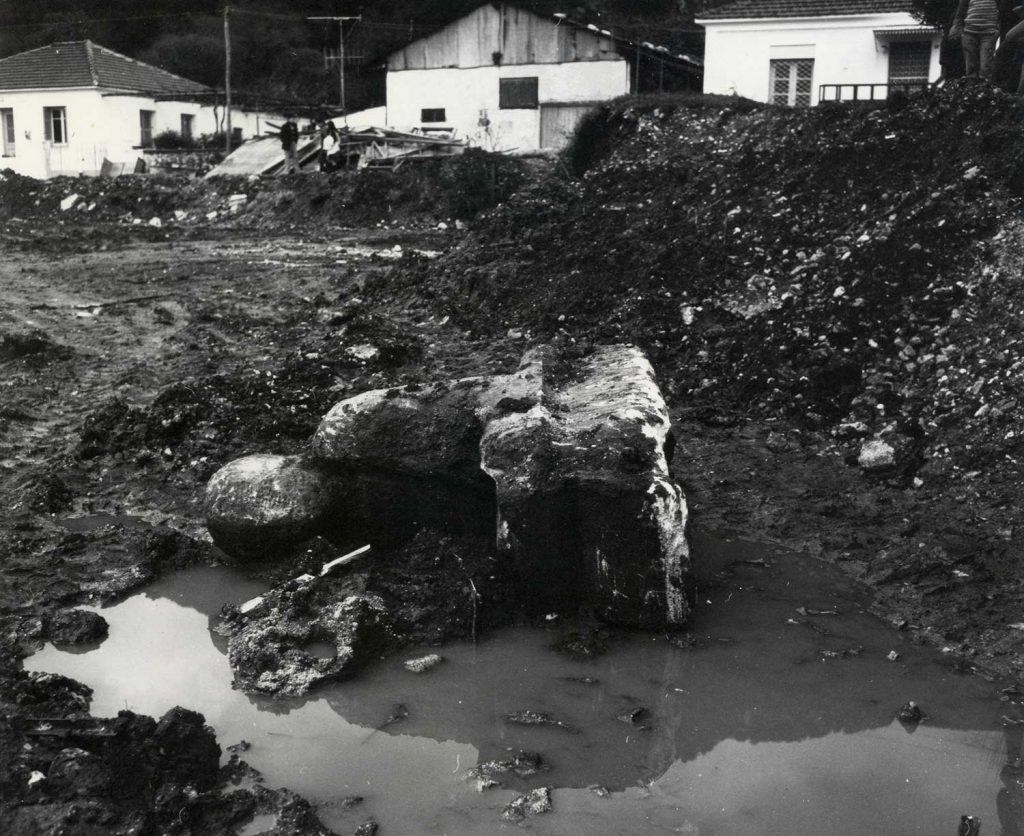 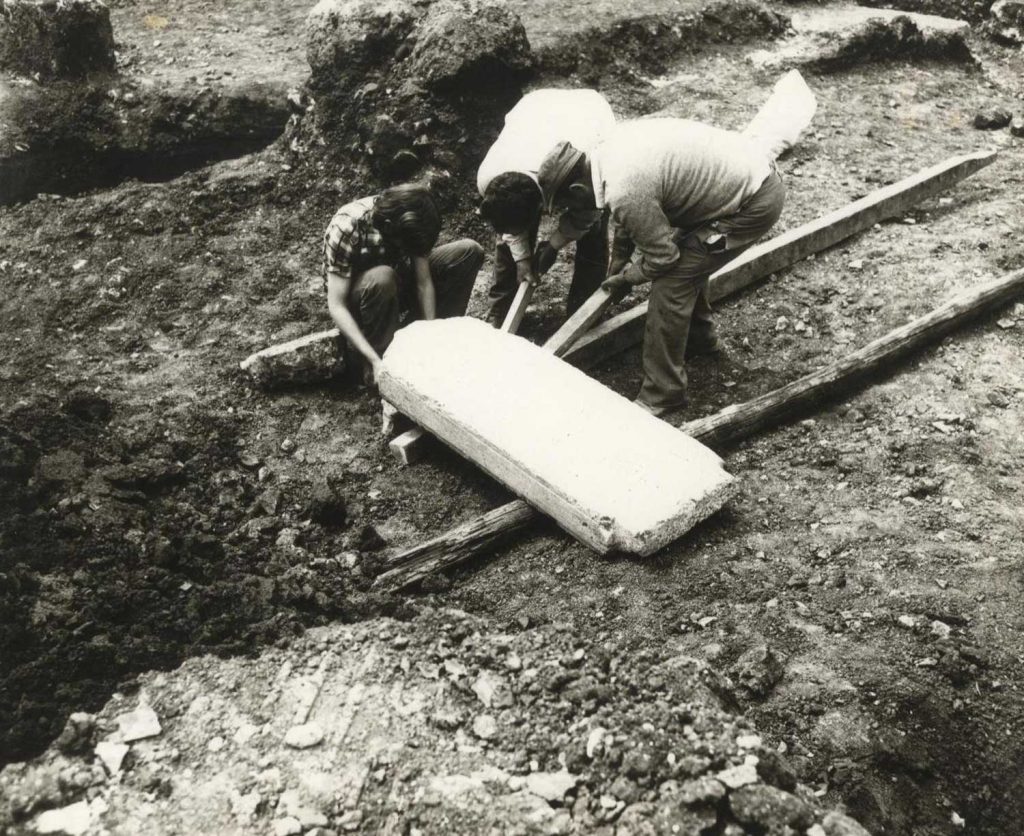 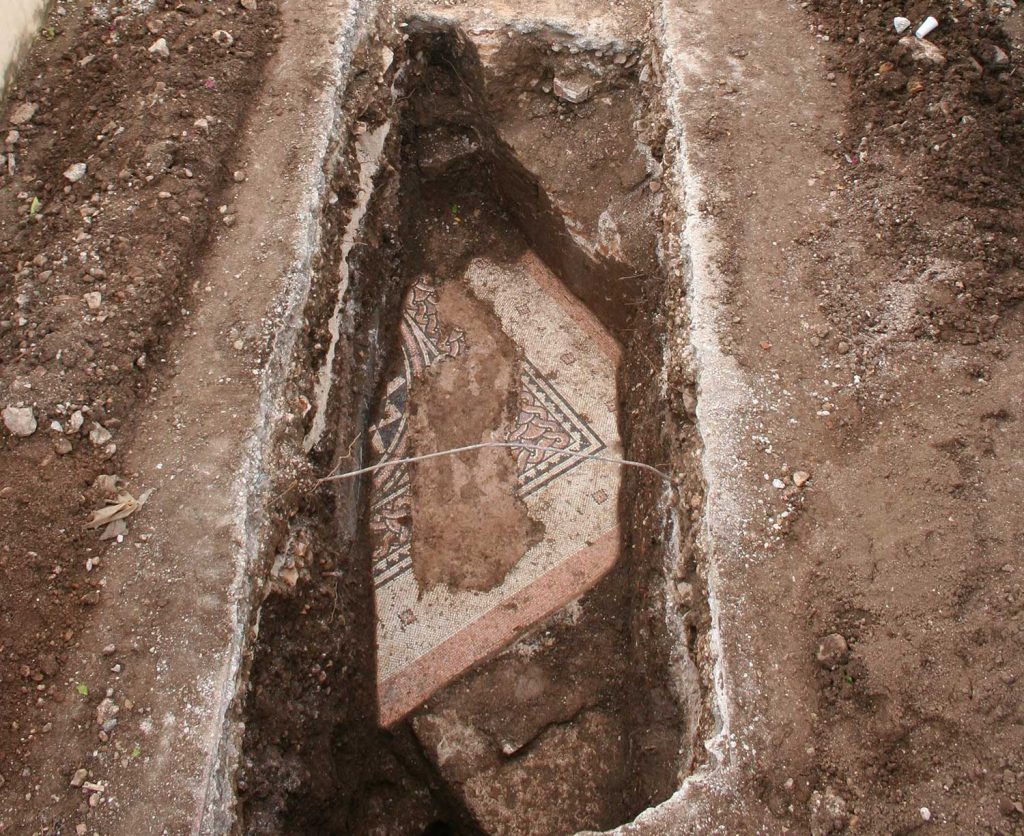 Bath remains on Agrilion Str. in an excavation trench. Under the “Drainage of dirty rainwater – waste water treatment plant of Same Cephalonia 2000-2006” project. 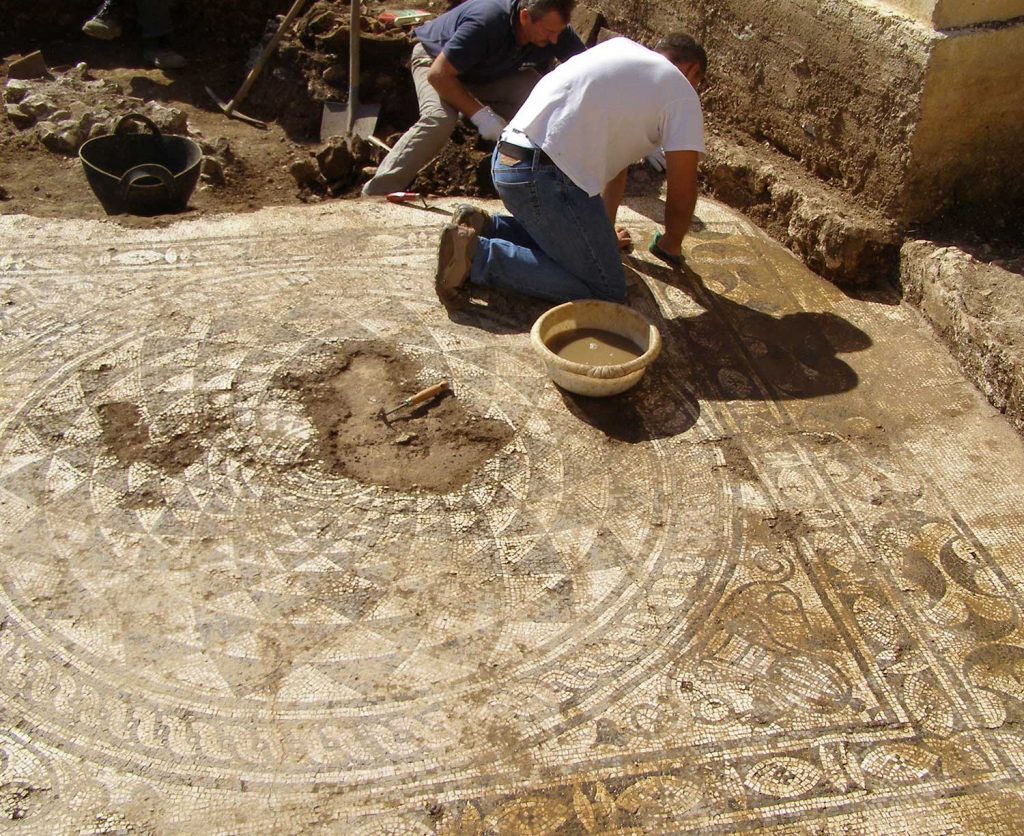 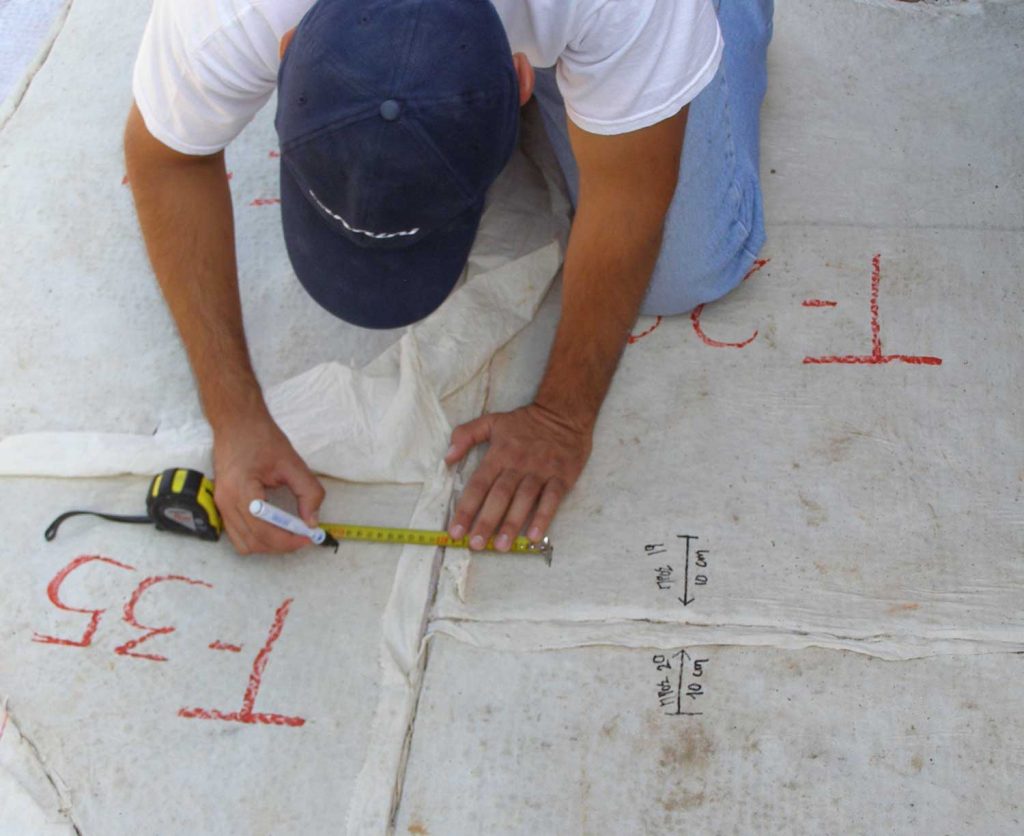 Counting and noting distances between pieces of the mosaic floor in the Bath installation in Dimoula plot, before being detached. 2006

Counting and noting distances between pieces of the mosaic floor in the Bath installation in Dimoula plot, before being detached. 2006
anaskafes_7 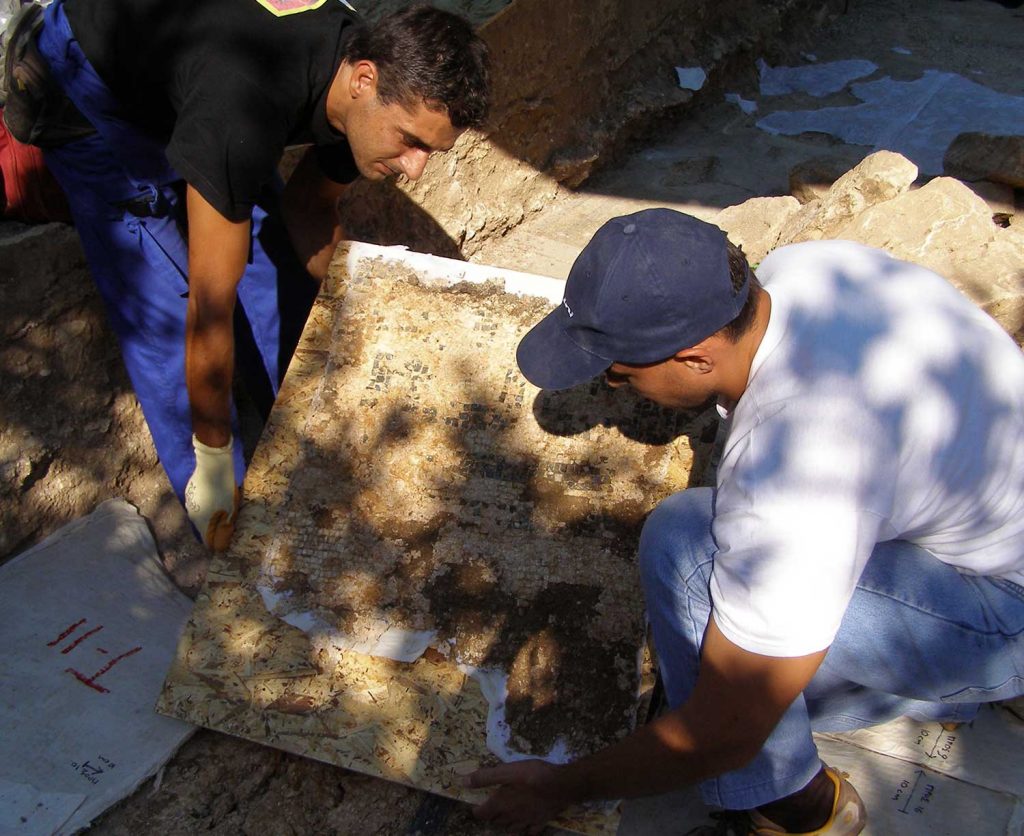 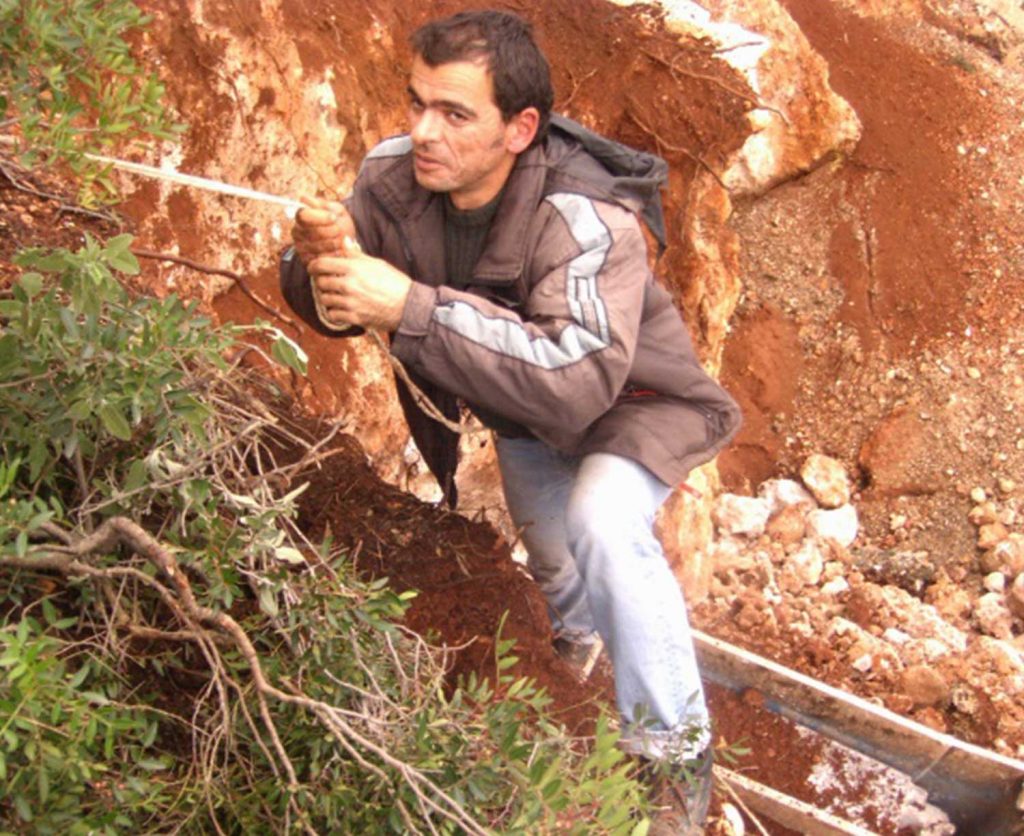 Hiking during excavation works in Same’s North cemetery at a steep part of Same-Antisamos Str., under the project “Drainage of dirty rainwater – waste water treatment plant of Same Cephalonia”. 2005

Hiking during excavation works in Same’s North cemetery at a steep part of Same-Antisamos Str., under the project “Drainage of dirty rainwater – waste water treatment plant of Same Cephalonia”. 2005
anaskafes_10 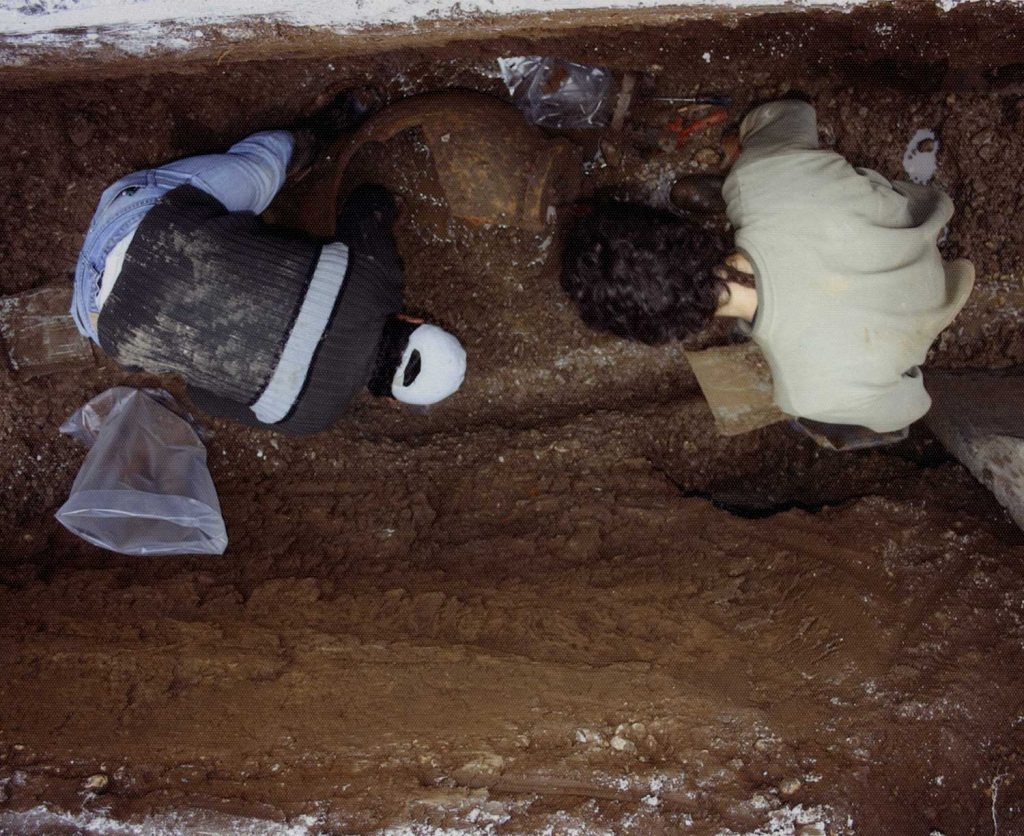 Discovering a burial vase in the West Cemetery under the project “Drainage of dirty rainwater – waste water treatment plant of Same Cephalonia 2000-2006”. 2005

Discovering a burial vase in the West Cemetery under the project “Drainage of dirty rainwater – waste water treatment plant of Same Cephalonia 2000-2006”. 2005
anaskafes_11 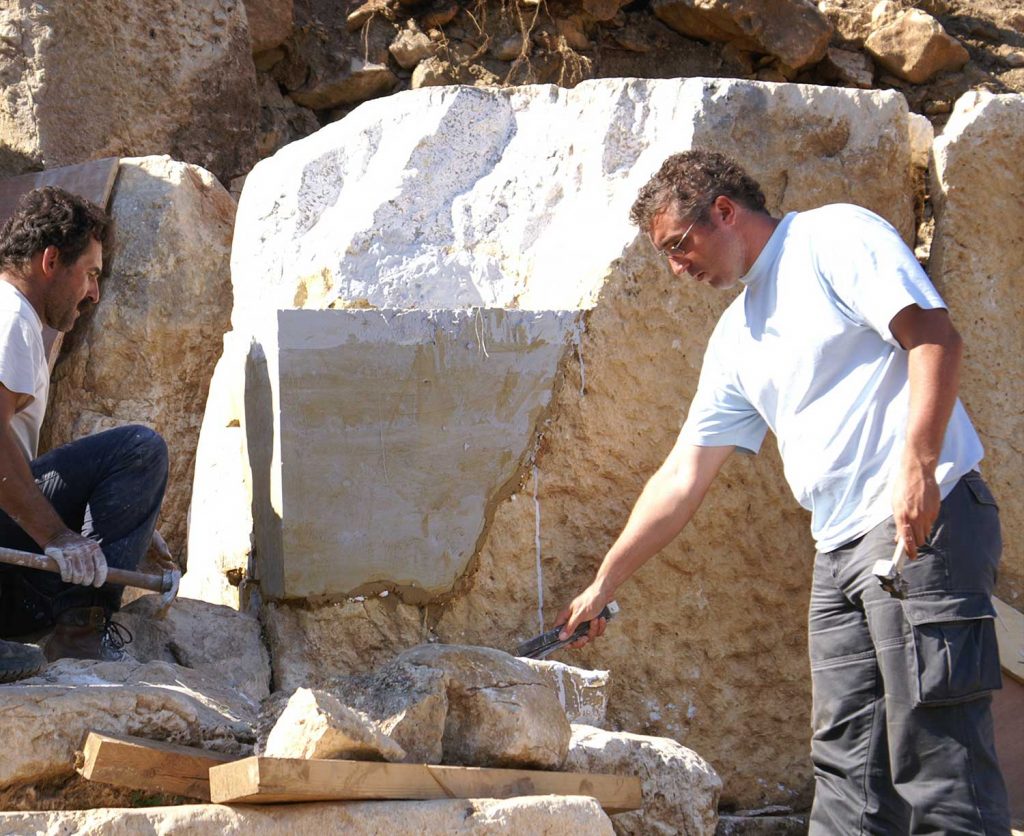 Restoring a detached part of a stone block on Same’s citadel. 2008

Restoring a detached part of a stone block on Same’s citadel. 2008
anaskafes_12 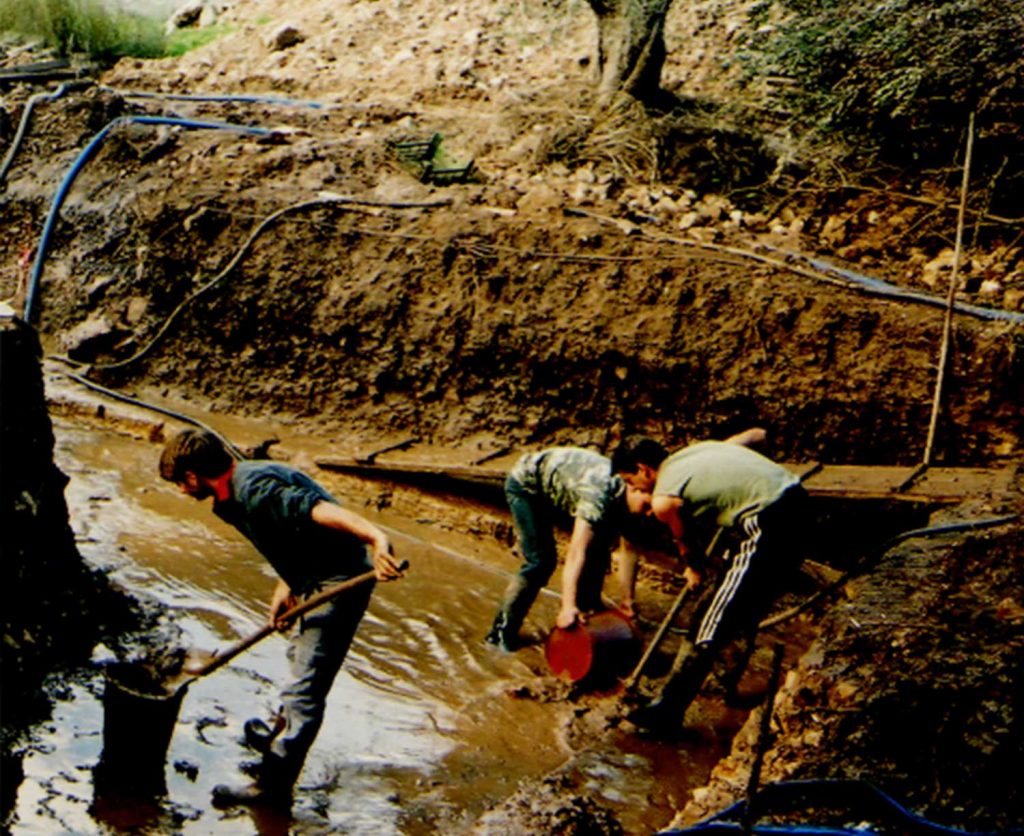 Excavations at Fiscardo’s Roman agora. The excavation conditions never allowed pumping out all of the water.

Excavations at Fiscardo’s Roman agora. The excavation conditions never allowed pumping out all of the water.
anaskafes_13 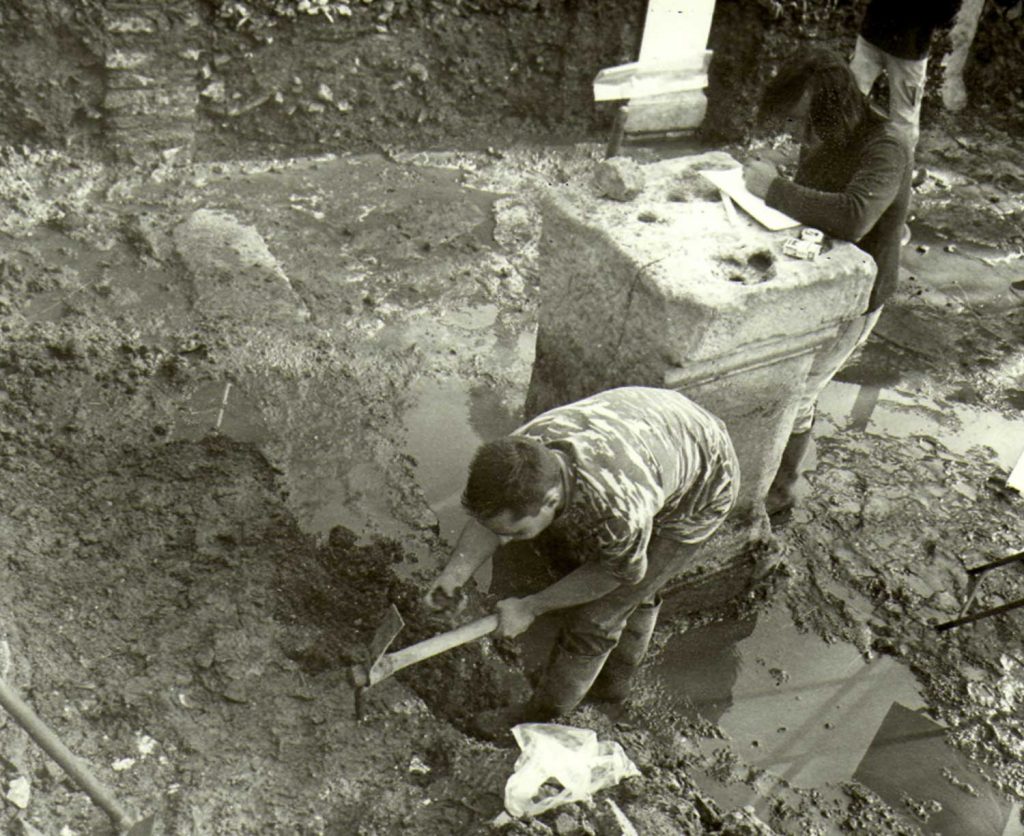 Conservation of a golden mouth-piece. Under the project “Restoration and set up of the Archaeological Collection of Sami and exhibition of the mosaics in Kefallonia”

Conservation of a golden mouth-piece. Under the project “Restoration and set up of the Archaeological Collection of Sami and exhibition of the mosaics in Kefallonia”
anaskafes_15 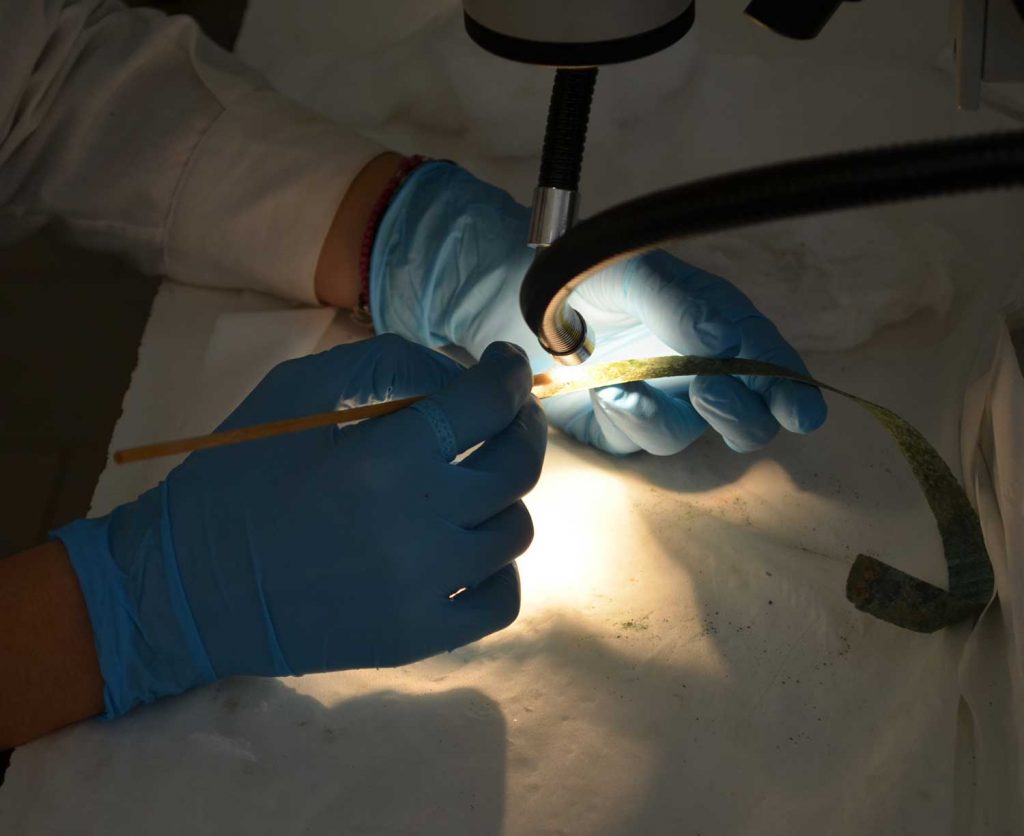 Same’s primary role in the island’s history, combined with its strategic location, drew the researchers’ and travelers’ interest since early on. Their works often describe monuments which no longer survive, while their recordings are usually significant sources of information for monuments which have not yet been identified by research.

Same’s citadels are mentioned already in Livius’ work, in the description of the city’s siege by the Romans. Based on that description, the hills of Agioi Fanentes and Palaiokastro, hosting the citadels, are known as Kyatis and ArxMajor respectively. The fortification wall of the city and the monastery of St. Fanentes always drew special attention and were described by the island’s travelers, even by Venetians, while special interest was expressed for the ancient harbor, and the submerged roman harbor – anchorage fell into their attention. Sources sometimes describe Roman remains scattered throughout the city and refer to baths apparently related to those on Dichalion Str., at the so-called site of “Loutro”, marked on a 1969 map drawn by V. Coronelli. Several travelers refer to burial offerings from Same, most of which are now lost. In fact, precious golden and silver offerings were melted in order to be reused during the period of English Protection. At the same time, governors and other ‘lovers’ of antiquities, transported ancient objects recovered while technical works took place on the island to their homeland, as mentioned by Tsitselis.

I.Tsitselis also speaks of excavations taking place at Same already since the time of Venetian occupation. In 1777, at the time of Provveditore (Commissioner) A. Pasta, excavations were undertaken in tombs of the area by monks of Agioi Fanentes, and in the same year, the general Provveditore J. Nani, “a very capable archaeologist” according to Tsitselis, carried many of the island’s antiquities to a homonymous museum in Venetia. Wishing to honour him, Cephalenians minted a commemorate medal picturing his bust on one side. In 1832 excavations were also conducted by Commissioner Seaton at the site of Fournoi at Same.

A lot of information on ancient Same is also drawn by the philologist O. Riemann in 1873, who at the same time collected evidence recorded by earlier travelers and researchers. Decisive for the understanding of the city was the contribution of the German geographer J. Partsch, who in his work on the geography and natural environment of Cephalonia and Ithaka in the period 1885-1890, recorded historical evidence and marked out sites of archaeological interest. In fact, he mapped the citadels of Krane and Same, and as a result discovered various monuments of Same and its territory.

In 1883, the archaeologist P. Kavvadias took up the systematic investigation of the area in order to investigate whether “the so-called Mycenaean art” was common on Cephalonia (Καββαδίας Π., ΠΑΕ 1899, σ.17). It was then that he unearthed the east gate on the hill of Palaiokastro/arxmajor, while buildings of Classical, Hellenistic and Roman times within the acropolis area as well as the western gate were discovered in 1899. Then, in 1915 he investigated an ellipsoidal building of prehistoric times at the site of ‘Vigla”.

Excavation research carried out in the area towards the end of the 1950s and in the 1960s, revealed the baths on Dichalion Street (in the years 1959 and 1960 by B. Kallipolitis). In 1964 the Melissane cave was investigated by S. Marinatos, after it was exploited by the Local Tourism Committee of the island and was opened to the public, and thus its archaeological significance was revealed. In 1971, Sp. Marinatos excavated a Mycenaean house at the site of Agioi Theodoroi.

Excavations were intensified since 1980 onwards, as the intense construction activity of the area led to the piecemeal recovery of Same’s monuments, such as public buildings, parts of cemeteries, houses, bath installations etc. lying beneath the modern city and around it. All excavations, archaeological works and in general all archaeological sites were supervised by the 6th Ephorate of Prehistoric and Classical Antiquities, based at Patrai until mid-2006, and then by the ΛΕ΄ Ephorate based at Cephalonia; by the Ephorate of Antiquities of Cephalonia since October 2014 and by the Ephorate of Antiquities of Cephalonia and Ithaca since February 2018. The field survey project conducted by the 6th Ephorate in cooperation with the Danish Institute at Athens since the early 1990s until the middle of the decade in the northern, central, eastern and southeastern parts of the island have contributed significantly to our understanding of the area. Research conducted in this context discovered and recorded areas of archaeological interest, the citadels of Same were drawn and it was attempted to reconstruct the city’s plan in drawing on the basis of building remains.

Rescue excavations conducted in almost every street of the modern city as part of the sub-project “Rescue excavations of antiquities”, aiming to rescue all archaeological finds recovered during the “Drainage of dirty rainwater – waste water treatment plant of Same Cephalonia 2000-2006” project, have been defining for mapping the city’s functions and reconstructing their chronological relationship. Research has revealed ruins of private and public buildings, parts of the south, west and north cemeteries, parts of bathhouses, including a large bath complex on Konstantatou Square as well as other, much sought-out monuments, such as the coastal wall and the location of the ancient harbor, or other, unknown monuments, such as a flood-control construction along the stream crossing the city, and a fountain house. Building remains were occasionally preserved in a visible state, while others are preserved buried underground or were torn apart in order to allow the installation of the drainage pipe. Since all discovered ancient remains were photographed and drawn, however, the ancient city’s topography started being mapped on a digital cartographic base under the supervision of A. Sotiriou, who was then the director of the ΛΕ’ ephorate of Prehistoric and Classical Antiquities. The same digital map included the drawings of the citadels undertaken by the Danish Institute, as well as all antiquities revealed during excavations of past years under the supervision of V. Kallipolitis, A. Mantis, I. A. Papapostolou, M. Petritakis, L. Kolonas, M. Petropoulos, A. Soteriou and T.Regakou. Their topographical mapping and digitization was undertaken by A. Andreatou and M. Spyratou, and since then it has been updated with all evidence recovered through new excavation research. Same’s street plan, produced by the Prefecture of Cephalonia and Ithaca, was used as the map’s base.

Research – Excavations at Fiscardo, the city of Panormos

In 1969, the basilica on the peninsula of Fournias was discovered and became known by I. Vokotopoulos. In 1984, G. Kavvadias realized how interesting the peninsula of Fournias is for the Stone Age while collecting stone tools. Excavation research started at Fiscardo in the 1990s: in 1993 the cemetery in the bay of Agios Andreas was discovered on the occasion of technical works run by OTE (telephone communications service), and the excavation was completed with intermissions in 1997. Small-scale excavations followed, and significant monuments were revealed since 2003 onwards, including the city’s agora (2003-2004 και 2004-2005), baths (2004) and a small “theatrical” structure since 2006 onwards under the supervision of ΛΕ’ Ephorate of Prehistoric and Classical Antiquities (2007), a building complex at the site of “Tachydromeio” (2008, 2015) and the burial monuments at the site of “Tigania” (2005-2006 και 2007).

In the years 2011-2015, the Roman cemetery was enhanced in the context of the Program “West Greece – Peloponnese – Ionian Islands”, under the project  “Promotion and Enhancement of the Fiskardo Roman Cemetery”, under the supervision of the then ΛΕ’ Ephorate of Prehistoric and Classical Antiquities. One of the most significant projects that were accomplished was the conservation and restoration of two sarcophagi and the production of their replicas, destined to be located in situ, while the originals would be exhibited in Same’s Archaeological Collection. It was urgent to remove the original sarcophagi from the area, so as to protect them from the impact of the weather conditions and their proximity to the sea. The installation of the original sarcophagi and their bases in the exhibition of Same’s Archaeological Collection and of the replicas in their place allows the visitors form an overall picture of the cemetery and especially of the mausoleum, while the visitors of the Collection, which also includes finds from the area of Fiscardo, form a better picture of the burial monument.